Deciphering organic matter sources supporting the high productivity of coastal zones, analyzing the pathways of their flow within food webs and the constraints of natural or anthropic factors upon their functioning constitute my core research.

The stable isotope methodologies applied to the intertidal soft-bottom systems like the Pertuis Charentais have enabled understanding their present structure and functioning, and have demonstrated that benthic primary sources, and particularly the microphytobenthos, have a major role in supporting their food webs.

The typologies of the primary producers, of the food webs they support, and the ecosystem services they provide, are largely driven by the nature of the soft-bottom habitats. The increasing pressures due to the climate change or human impact upon these habitats are strongly affecting the sedimentary environment, thus rising questions about their evolution.

Analyzing the functioning of past food webs in relation to coastline changes due to sea-level changes or human activities may thus give clues about the future of littoral ecosystems. 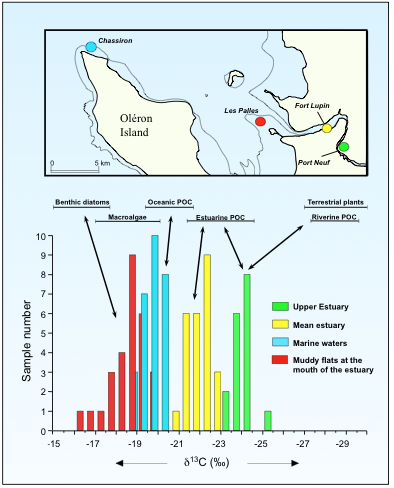 δ13C of Crassostrea gigas oysters and of the trophic resources from land to ocean in Marennes-Oléron bay (from Riera & Richard, Estuarine, Coastal & Shelf Science, 1996, 42 : 347-360)

In this work, carbon stable isotope measurements demonstrated for the first time the prominent role of the microphytobenthos (MPB) as trophic resource of oysters, since nitrogen stable isotope data showed that macroalgae were not significantly contributing to oyster diet.

A same MPB role was later found for most deposit feeders and other suspension feeders, in numerous intertidal muddy or sandy-muddy environments. 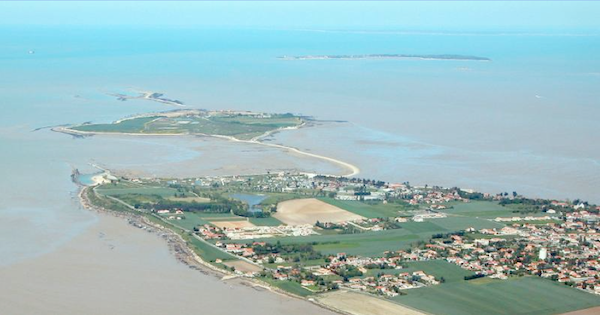 Madame Island à the mouth of the Charente river (Picture from Ph. Dufour)