An example of tide gauge and GPS data combination: 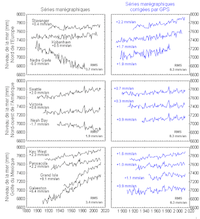 The figure on the right (click on the image to enlarge) shows how well can work corrections of tide gauge records using GPS velocities obtained from a state-of-the-art data analysis strategy. The left panels display annual mean sea levels from high-quality tide gauge records in three different regions of the world coasts (data available at the PSMSL international service). The right pannels show these records corrected for vertical land motion using GPS velocities from our latest solution of the ULR consortium. The spread observed in the rates of sea level change in the left panels is substantially reduced in the three regions (standar deviation of 0.3 mm/year). These results are updated from Wöppelmann et al. (2009) in Geophysical Research Letters. 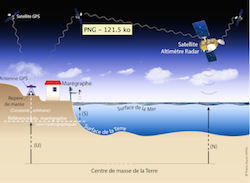 In the illustration on the left (click on the image) are represented the principal elements of the observational situation at a tide gauge. Satellite radar altimetry plays an increasing important role in sea level observation. However, to be useful for coastal studies on impacts (submersion, erosion, civil engineering, etc), its data requires a correction in order to transform the satellite geocentric sea levels into relative sea levels with respect to the land. High-precision GPS methods, for instance, can provide this supplementary data such as S = N - U (notations from the illustration) in the idealized case study depicted in the illustration. The situation can indeed be more complex, in particular because here is assumed that the tide gauge and the satellite are observing the same sea levels at the coast and offshore, respectively.

Some articles for a large audience & Contribution to books: