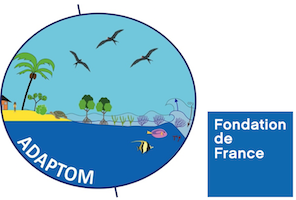 Origin of the ADAPTOM Project:

The webinar organized by the French Coastal Conservatory (October 2020) about climate change adaptation in French overseas territories involved more than 150 participants from overseas territories and mainland France, including state services, regional governments, deputies and senators, researchers, and NGOs and local associations. During this webinar, one working group addressed nature-based solutions aimed at containing coastal risks, based on the presentation of experiments implemented in Guadeloupe, Saint-Martin and Guyana. A consensus view emerged among participants, who expressed their preference for nature-based solutions (NbS) vs. hard engineering to reduce current and future coastal risks. However, participants emphasized that:

They did not have yet the benefit of hindsight to say whether NbS were the right course of action or not, and therefore needed to learn lessons from existing experiments.

Their need for (i) networking at the scale of French overseas territories, (ii) having an inventory of implemented NbS, and (iii) having shared assessment methods.

The major importance of considering and reactivating traditional (incl. ancestral) practices that have proved to be effective. ADAPTOM addresses these needs based on a strong collaboration with concerned and already engaged stakeholders. The organization and follow-up of ADAPTOM relies on the organization of 8 workshops: a launch workshop, 6 topical cross-region workshops combining room work and field visits, and a closure workshop.

ADAPTOM focuses on settled French overseas island territories (Guadeloupe, Martinique, Mayotte, New Caledonia, French Polynesia, Reunion, Saint-Martin, Saint-Barthélemy, Wallis and Futuna) and addresses five key questions: Which types of NbS have already been implemented to date? Did NbS experiments generate benefits for climate adaptation, especially through individual and collective learning? Were their benefits (incl. learning, networking, etc.) shared and highlighted? Does regional cooperation (at the scale of each ocean basin) contribute to NbS development? How can scientists usefully assist local stakeholders in NbS experimentation and implementation? ADAPTOM addresses these questions using two complementary participatory tools: (1) The co-building, by scientists and concerned stakeholders, of a collaborative geo-visualization tool, which will take the form of a shared web-GIS platform. (2) The organization of virtual and face-to-face workshops in the three ocean basins where French overseas island territories are located (Caribbean region, and Indian and Pacific Oceans). ADAPTOM comprises four main tasks (T2 to T5): T2 consists in mapping NbS projects and producing a catalogue of NbS, which will be delivered in two formats, including hard-copy and digital (web-GIS platform). T3 focuses on assessing the potential of NbS for reducing coastal risks and promoting coastal adaptation. NbS experiments will be analyzed based on an interdisciplinary approach considering a set of variables, including technical effectiveness, social acceptability, governability, funding of NbS projects, as well as their benefits and dis-benefits, and the extent to which they promote knowledge sharing. This assessment will allow us to identify ways for progress and lead to the production of a Methodological Guide. The results of the assessment will be included into the web-GIS platform. T4 is dedicated to the dissemination of results among concerned stakeholders, the civil society, Master students and the scientific community, through the media, the realization of documentaries and videos and an exhibition which will take place in French overseas territories and in Paris. T5 aims at formulating concrete recommendations to assist public and private actors in coastal climate adaptation using NbS. This task relies on the organization of a closure workshop, the presentation of ADAPTOM results to the French National Assembly and French Senate and making concerned stakeholders aware of existing jurisdictional tools supporting the implementation of NbS. We will also assess the extent to which existing jurisdictional tools are appropriate or not to support NbS experimentation and implementation. 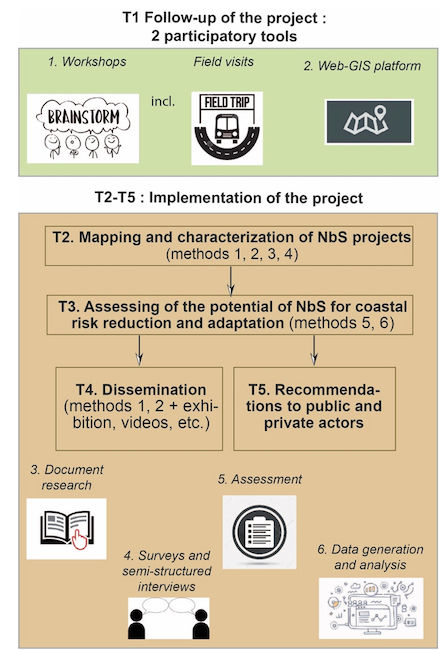 On the left: Mangrove restoration, Wallis and Futuna (© Dir. Envt). On the right: restoration of the sand dune at Grande Saline after the September 2017 tropical cyclones (© V. Duvat).